Holy Moly! I missed A LOT in the Big Brother House – most crucial, not one, not two, but three major hurricanes.

The devastation I’ve seen in Texas, Florida, Puerto Rico, and many more breaks my heart.

That’s why I’m teaming up with WAG to participate in their Clean-Up Day in Houston on October 22nd. We want to help as many people as possible and get our hands dirty in the process.

In conduction with the clean-up day, we are raising funds to donate directly to The Red Cross (and WAG will match up to 10K) Woop woop!

Everything we touch today comes with a filter. From our pictures and videos, to what we say and the feedback we get, all the way to how we see ourselves and how we let the world see us. Some are societal, and some are self-inflicted, but more and more we are choosing to ignore the reality in favor of the filter. The problem with the filter, however, is that it doesn’t really change anything, it just strains out what you don’t want to see, be seen, or in some cases, deal with.

You can’t change what you aren’t willing to accept, and you can’t accept what you aren’t willing to see. At some point, the disparity between the filter and the reality becomes so big, that all you are left with is fiction. Remember that progress is rooted in reality, so if you are scared, ashamed, embarrassed, or nervous about what’s behind that filter, realize that whatever it is that makes you feel that way is going to stay right there until you are ready to take the filter off, and stare all that is real square in the face.

Every once in a while, we need a reminder that filters actually exist to highlight or enhance what is good as opposed to covering up what is bad. If everything looks great on the outside, but you are still in unfulfilled turmoil on the inside, try living life unfiltered for a while. It may be humbling, discouraging, or downright depressing at first, but soon enough those feelings will be overtaken by progress, and the only thing left to be filtered will be the haters, the naysayers, and the doubters. – CPT Ryan

Determining the space between you and your goals is as simple as looking at that space between your ears. Everything you have ever determined to hold you back from your dreams was either created, or has lived, in that space. Those people who hold you back, the reasons you “can’t” do something, the setbacks you experience, and all the chips stacked against you, may very well exist, but their power is only derived and empowered by your mind.

Life is a game of inches, and everything you’ve ever wanted from life starts with taking control of that six inch span from one ear to another. If you give life, people, obstacles, and setbacks a single inch of that space, they are all going to take a mile…along with your self-confidence, your will, and your determination. There will be times where it feels like you have surrendered that space to life, along with your hopes, dreams, and future. But the first step in taking back those inches lies in having the courage to simply decide.

The power to decide is all you need to arm yourself with in order to take control of the most important six inches in your journey. Just decide to no longer give power to those who hold you down. Just decide to finally go after that dream job or career you’ve always wanted. Just decide to cast aside all of your doubts, fears, and insecurities in the pursuit of what truly makes you happy. And just decide that, in all reality, you are the owner and sole proprietor of that space between you and where you want to be, and the process of owning that space starts an inch at a time. ~CPT Ryan 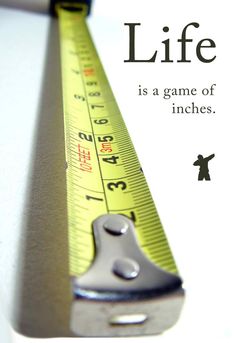 Opportunity can only be seized when two things take place. First it must be seen, and second it must be prepared for. Without both sets of circumstances converging upon an opportunity, it will pass you by, or slip through your fingers. You can prepare for opportunity all you want. You can have all the degrees, the skills, the fitness, and the connections, but if you can’t see opportunity knocking on your door, you’ll never let it in. Conversely, you may see the endless opportunities in the world, but if you haven’t put in the painstaking preparation, you are damning yourself to a life of watching from the sidelines while other people get their “Carpe Diem” on.

So you’ve tirelessly prepared, and you’ve locked an opportunity in your sights…how do you now parlay that opportunity into success? There is a fundamental difference between sight and vision. Sight is merely identifying something based on the recognition of certain traits and characteristics of what you can see. Vision is your ability to see that which may not actually be within your sight yet. It’s one thing to be ready to seize an opportunity, but it’s a completely different animal to know what to do with it once it has been seized. That takes vision.

Countless people have taken opportunities which they have seen rise out of preparation. But the truly successful among us have seized the opportunities, exploited them to their fullest potential, and used them to move on to the next one long before it actually happens, if only in their mind’s eye. If you a preparing to seize an opportunity, don’t be taken by surprise when it happens. It should just be part of the plan. And when the people ask “Could you have ever imagined this level of success?”, you should be able to tell them you didn’t just imagine it, you visualized it, and you’re right where you always knew you’d be. – CPT Ryan